Mostly to keep the posts going, you should all know something about me:

When I’m bored, hungry, stressing, procrastinating. I mix, beat, whip, fold, simmer, roast, toast, pipe and spoon. Something nice comes from it, or if it’s an absolute disaster, I remove all evidence of ever having tried.

So with this in mind, and the fact that I’ve been eating zucchinis (courgettes, for those of the UK) for the past several months as summer has awarded us with a bountiful harvest.. I present to you, cinnamon and walnut cake.

For those who aspire to mimic my level of expertise (or, as most will do, surpass it) the recipe:

NOTES
– This cake is very moist. It’s a terrible word, but a good description. Moist.
– When I say vanilla essence, I mean essence. extract isn’t the same, if you use that stuff you should add extra. And yes, I am a fussy cook. Suffer.
– I used a zucchini that weighed 350g whole. Chopped off one end and grated. Added the lot, watery juices, skin and all.
– If you’re trying to hide that there’s zucchini in this, I would suggest peeling it before grating so there are no flecks on green in the final product.
– If your cakes are too domed to stack, cut them down, level it off.
–  Personally, the icing isn’t necessary. I put it in because when Dad sees cake his following words are always “Where’s the icing?” unless a copious amount has been slathered all over it.
– If you do use icing, walnuts on the outside. Do it. Covers a bad job when lacking a palate knife, and also tastes better.
– My quantities area approximate. Play around, I did. For example, if the icing’s too thick, add more yoghurt. Ta dah, easy.

I should tell you, this recipe is pretty much that of The Hummingbird Bakery, found in London, opened 2004 by Tarek Malouf on Portobello Road. Another three franchises now exist, in South Kensington, Soho and… somewhere else. I’m waiting for them to branch out to Australia. Then I’ll stop cooking when I’m bored and start eating. Maybe.

Their most recent book, Cake Days, can be purchased on Book Depository (http://www.bookdepository.co.uk/) as can their first book, The Hummingbird Bakery Cookbook. Look for pink and brown covers. They have layered cakes, cupcakes, cheesecakes, tarts, slices, cookies, muffins and whoopie pies – an American creation, I believe. Pumpkin whoopie pies are amazing. 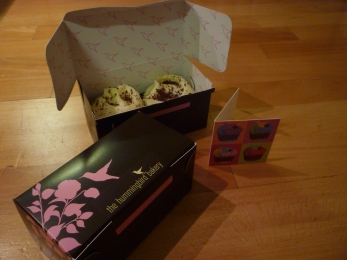 How do I know these pies are amazing? No, I haven’t yet made them, however I have this strange spread called Marshmellow Fluff which – I’m sorry to those who like it – is disgusting on its own, however it is a part of the filling for whoopie pies.

Would you eat flour straight from the packet? Or on toast? Or as a sandwich with Peanut Butter creating some grotesquely deformed offspring dubbed “fluffernutter”? No. And that is how I justify liking whoopie pies but not Marshmellow Fluff.

So do I intend to make these pies? Yes. And I’ll let you know when I do.

With all that out of the way, does anyone have some good tomato recipes? We have a 30 x 15 x 20 cm container of tomatoes. And they’re still growing. THEY ARE TAKING OVER!!! S.O.S.

Jena,
a member of the Resistance against the occupation of tomatoes in my kitchen and marshmellow on my bread.

Please, regular blog writers and readers – are there any? – excuse this intrusion. Thanks to Helix and the rest (meaning I mostly blame Helix) I will be a another “regular” user of this blogging space.

So who is this blasted new kid who dares to so casually invade this not-so-private webpage? Exactly that, the new kid.

To you, beloved readers I am Jena. To many others, I am Corner Girl, due to  my misfortune of choosing to sleep in a corner rather than bunched up with the rest. Once. It shall ne’er be forgotten.

You’ll find me posting random rubbish, ramblings, the occasional recipe, photo or fun fact. But predominantly it’s simply going to be like this.

As soon as I learn to use this thing, I hope it will be more interesting. For now, I bid you adieu, and leave a photo of my cat. 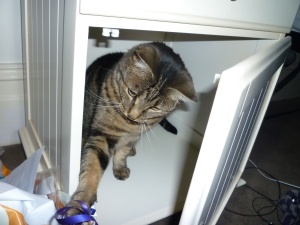 I think the fact that the first photo I’ve posted is of my cat serves as evidence:
30 years from now, I will be a crazy cat lady.